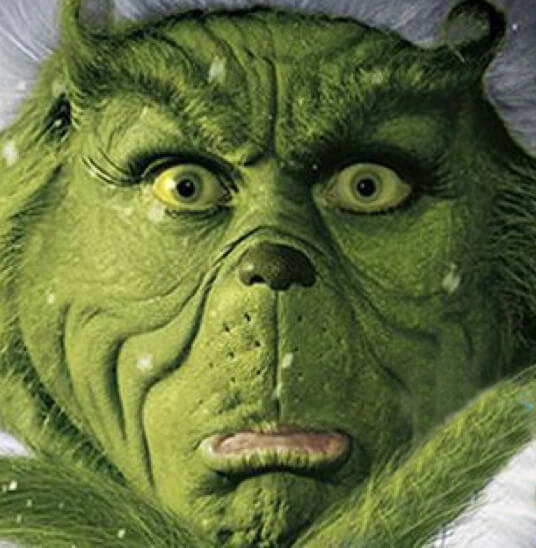 Botox and Facial Filler for the Grinch Who Stole Christmas

Carrington Medical knows how to make the Grinch look a little less grinchy.

Take a look at the Grinch.  What is it that makes him look so old and cranky?

I think it is his glabellar from lines between his eyes that make him look like he’s having a pretty bad day. It is his nasolabial folds (those creases that go from the sides of the nose to the corners of the mouth) that make him look so old. No wonder he has such a bad attitude. He can get in a bad mood easily by looking in the mirror every morning.

If the Grinch were to come into Carrington Medical, here is what I would recommend:

I would smooth out and soften his forehead creases with Botox.  From the looks of it, he will need a pretty large dose, maybe 60 units.  The injection would sting but would be quick and he would see a remarkable improvement within 3 days or so.  In addition, he would feel much more relaxed.  If he wanted to scowl at his poor little dog, he would be unable to.  Smile, yes but scowl, no.  This amount of Botox would last at least 3 months.  If he kept coming back for treatment, his dose would likely drop.

I would fill his nasolabial folds with one of the hyaluronic facial fillers that I use frequently each week.  This is terrific for treating the area around the mouth which is a problem in some people and hard to treat with other methods.  Even a full facelift doesn’t help this area very much.  I would use 2 or 3 syringes to get as full of correction as possible.  It’s been my experience that patients who opt for just partial correction are not nearly as satisfied as those who get the full treatment.  Three syringes of a filler, such as Juvederm would last at least six months. We have many patients who have had a nice lasting improvement for up to two years.

I hope the Grinch comes into our office this holiday season and leaves those poor Whos in Whoville alone.